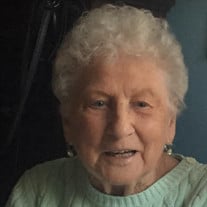 Robbie Smith (Oden) Carnes, formerly of Crossville, crossed over to Heaven Saturday night after a brief illness. She was 91 years of age. She raised her two “girls” and was a “second mother” to her two sisters’ children and their families. She was the matriarch, historian, and heart of this small family. She and her husband opened Oden piano company and later she worked at Belk, Alabama City and Crossville Banks. She was also an avid gardener, antique shopper, collector of violet-ware, and lover of hummingbirds. She was a long time active member of the Crossville First Baptist Church and a devout Christian. She was preceded in death by her parents, John A. and Dora Virginia Davis Smith, her two sisters, Johnnie Cagle and her daughter Johnnette, and Tommie (Black) Ward and her son, Michael Black, as well as her own grandson, Mark Coley. Robbie was preceded by her husbands, Olen Barksdale, the love of her life, and J.M. Carnes (Pawpaw). She has two daughters, Sammye Oden Kok ( Corstiaan Kok ) and Terri Coley (Gary Coley), granddaughters Brandy Ray Dinsmore Cobbs (Jerry Cobbs), Taylor Coley ( William Morrison), Her great grandchildren are Will and Jack Dinsmore, Carter Morrison and Shelby Cooley, step-grandchildren, Chris Coley, Christy Coley Dodd, and William, Michael, and Stan Kok and their families. . She also leaves behind her beloved maternal niece and nephews, Shirley Cagle, Harry Cagle, and Joe Black and their families as well as all the “Odens” with whom she remained very close and loved dearly. Her Funeral Service will be 1:30pm Wednesday, July 15, 2020 at Crossville Memorial Chapel with burial to follow at Crossville Cemetery. Rev. Wayne Tarvin will be officiating. Pallbearers will be Chris Coley, Will Dinsmore, Jack Dinsmore, Brett Conwill, Christian Coley, and William Morrison. Visitation will be 12:30 until 1:30 before the service at the funeral home. Crossville Memorial Chapel Directing

The family of Robbie Smith Carnes created this Life Tributes page to make it easy to share your memories.

Send flowers to the Carnes family.